Trumpeting to the East

Several readers were very interested in hearing about the recent trumpet activity in the sitting we mentioned in the last blog.  Here is a photo of them after the sèance when the lights came back on. Our sittings last for an hour, and about 5 minutes before closing I had thought I had heard a slight shuffling noise on the floor where the trumpets were, and perhaps this was when they were moved. 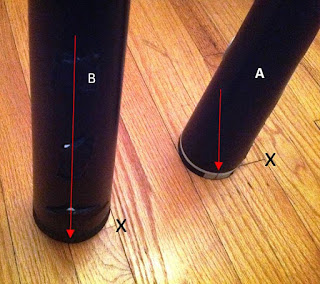 Both Trumpets A and B were aligned facing magnetic North, indicated by the large “X” where there are lines in the floor formed where floorboards join. The red lines show how both trumpets moved a perfect 45 degree arc to direct East.

Note that Trumpet A has a thin line of glow tape encircling its base, with a wider piece of the tape also added, and a straight pencil line drawn through it (the red arrow is pointing at it) and which was used to align with the floorboard’s juncture line. This extra piece of wider glow tape was placed there by Spirit during our fourth session nearly two years ago, which they had retrieved from a closed box where I had put some of the tape scraps; Spirit then also drew the pencil line on the tape! Although it can’t be seen in this photo, another pencil line was drawn along the edge of the wide bit of tape where it contacts the floor. There were no pencils in the room at the time, which had been blacked out and the only entryway securely shut.

Originally there had been glow tape on Trumpet B, but Spirit indicated we should cover it up,as they felt the external light was distracting us from keeping focused on our inner senses. 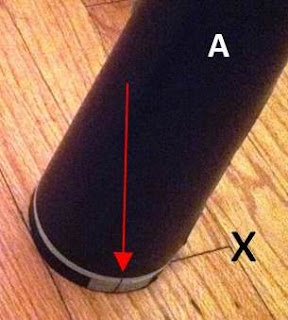 These trumpets are plastic and very light, and were constructed for us by the medium Tim Doyle, Chesterfield, UK. We have experimented with affixing light strips of aluminum on the insides, and also spray the insides with a misting of water before each sitting.

Our trumpets were lined up with magnetic North to synchronize them with the crystals in the dome. The crystals are aligned with north/east/west/south directions, as guided by Robin Foy,  For this most recent sitting, the table upon which the dome rests had been moved toward a new position in the room as mentally requested by Spirit, and perhaps this is somehow connected with the renewed trumpet movement, as the trumpets had been “silent” for quite some time. 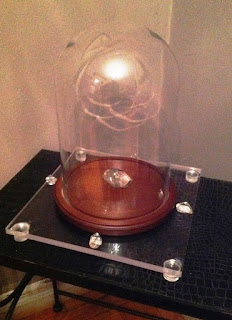 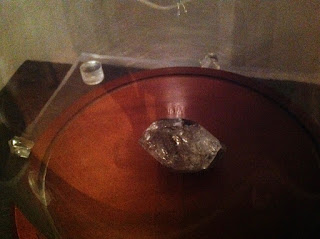 The crystals in the dome are known as Herkimer Diamonds, a very unique quartz crystal found only in Herkimer County, New York. Spirit had requested that we use only crystals that come from near where we were sitting, a seemingly very odd request, as none of us had ever heard of any such mineral mines in New York State. Brief research revealed there were such crystals, and what crystals they are! According to Crystal Vaults they are used as “attunement stones”. Their “memory storage” serves the purpose for energy accumulation as well. Further:

Herkimer quartz “diamonds” are the high energy seekers of the crystal world. unusually transparent with a brilliant sparkle, they manifest pure, solid light and are powerful amplifiers of spiritual energy. as perfect conduits of the universal life force, they are exceptional healing crystals, and are used in meditations, dream and vision work, and advanced spiritualization applications. 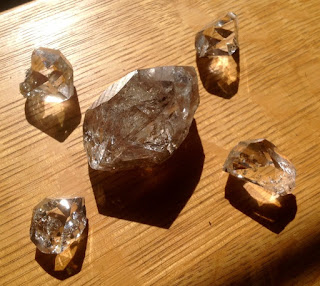 The Spirit orchestrated my finding a very well-known private gem merchant right here in NYC who happened to have exactly the right number of crystals needed, and, for some unknown reason, at greatly reduced cost for these particular stones.

So it can be seen why Spirit has chosen them for us. Above is a photo of the 5 dome crystals, charging in the morning sun. They are strange because they have two termination points, and always have 18 facets. I was fortunate at being led to a beautiful “Herk” pendant, set in silver, at the crystal store in Lily Dale. 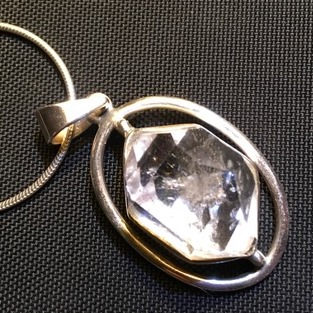 Finally, here is a link to an article recently published in the newsletter of the Afterlife Research and Education Institute by Craig Hogan, sharing some info about our circle and another who are experience some fascinatingly new approaches to mediumship as orchestrated by Spirit. 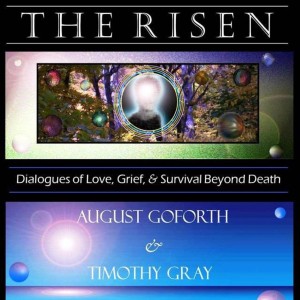